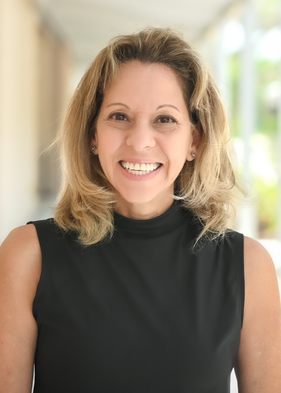 Dance and Theater Instructor
​Christine Orta, a native New Yorker, raised in Queens, started dancing at the age of five.  By the time she was 15 she was performing and competing with a local dance company. Her area of studies included: jazz, tap, hip-hop, ballet, acrobatics and theatre. Christine continued her education and earned a Bachelor of Arts Degree in Dance in 1988, from Hunter College, City University of New York. It was there, under the direction of Billy Siegenfeld and Jana Feinman, that Christine fell in love with modern dance and was inspired to become a teacher.  She always loved working with children and was a natural at creating and directing dance productions.

After graduating College, Christine opened her first dance studio, Dance America On the Move, located in Queens, New York.  A second studio, On the Move, followed shortly after that. In 1994, Christine moved to Puerto Rico and shared her passion for teaching with a third dance studio for the children of Humacao.

After having two children, she became a certified Level 3 gymnastic coach and continued teaching dance and gymnastics throughout Northern Virginia. In 2013, Christine and her family moved to Florida where she became even more passionate and inspired by her own children.  Daughter Sasha Rose, a former competitive gymnast became a member of the dance team “HEAT”, at Manatee School for the Arts.  Younger daughter, Raina Lynn, is an aspiring ballerina and musical theatre performer. Raina currently trains at the Sarasota Ballet Conservatory and Reflex Arts, Dance & Yoga in Sarasota.

Christine’s energetic nature and passion for teaching have granted her a successful track record of improving her student’s knowledge and love of dance and theatre.
Back to Our Staff